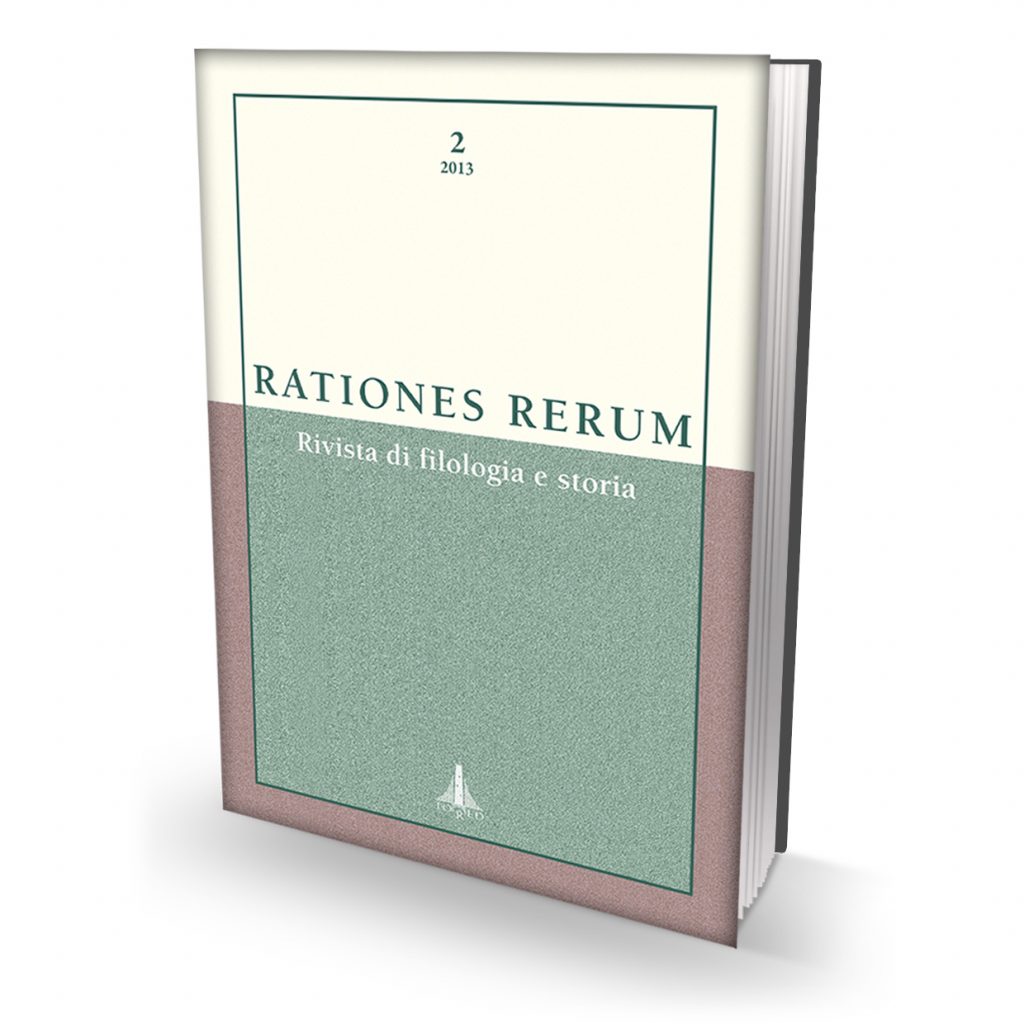 Leopoldo Gamberale
L’Italia di Enea fra passato e futuro
pp. 9-67
Abstract: This paper describes the way Virgil presented Italy, in a direct relationship with Aeneas, his poem’s protagonist. Italy not only represents the place of the hero’s arrival, but his future, which is born from remote origins, even a prophecy from Homer, Iliad Book 20, and remains, at least in part, unfinished. This aspect has also been captured in modern literature and art: significant examples are found in the work of poet Giorgio Caproni and sculptors Francesco Baratta (1726), Ugo Attardi (2001-2004) and Sandro Chia (2005). In all these instances, as is natural in the reception of a classic work, Virgil offers a starting point for stating new values and for giving an old myth a new lease on life.

Fabio Copani
Camarina e i soldati di Ippocrate
pp. 75-83
Abstract: In 492 BC the tyrant of Gela Hippocrates defeated the Syracusans at the river Heloros and placed his camp at the Olympieion, just outside Syracuse. The delegates of Corinth and Korkyra, called in to settle the dispute through arbitration, decreed that Hippocrates had to give back the prisoners in exchange for the city of Camarina. It is not clear why the tyrant accepted these conditions, since he evidently aimed at conquering Syracuse. The thesis of this paper is that Hippocrates was worried that he would no longer be able to keep his army under control, especially the soldiers of fortune hired for the war; in such a situation, the territory of Camarina offered a good solution: pay the mercenaries with new land and thus prevent their rebellion.

Giovanni Marginesu
Architetti e santuari. A proposito di alcune epigrafi ateniesi
pp. 85-113
Abstract: This paper analyses the role of the architect in the sacred spaces of the Greek poleis from the 5th century BC to the Hellenistic age. The first section deals with the activity of the architect Callicrates; the second studies the importance of the care and restoration of cult statues; the third investigates the sources for the ἀρχιτέκτων ἐπὶ τὰ ἱερά, a special figure in the Athenian administration of public works during the late Classical and Hellenistic ages.

Patrizia Mureddu
Misoginia o mimesi? Ricerca e rappresentazione dell’elemento femminile nel dramma euripideo
pp. 115-134
Abstract: Comedians and ancient biographers blame Euripides for his misogyny, though in his works he does not appear more misogynist than any other archaic and classical Greek author. The reason for this reputation most likely should be sought in his constant research for dramatic mimesis, which led him (on the basis of the medical and philosophical beliefs of the time) to emphasize and to portray on the stage traits of his female characters that he believed more “womanly”: sensitivity and maternal love but also erotic passion.

Giovanni Maria Leo
Marginalia a Bernand, IMEG 62
pp. 135-144
Abstract: This article focuses on the form and content of an epigram on stone of the Hellenistic age (Bernand, IMEG 62) and aims to highlight the literary skills of its anonymous author.

Caterina Moro
Il sacrificio ebraico come “abominio degli Egiziani”: fonti classiche e tradizione giudaica
pp. 145-165
Abstract: This paper explores the idea that Hebrew sacrifice – especially the slaughter of the pesach lamb – was a purposely hostile act towards Egyptian gods and their sacred animals. This notion is reported by Manetho and Tacitus but is also quoted in Jewish sources as an interpretation of Ex. 8, 22, as in Philo De fuga and in the Palestinian Targums. The author suggests a Jewish origin for this theme, influenced by the Egyptian conception of sacrifice as a symbolic elimination of the enemies of the deity.

Alessandro Campus
Il tofet tra mito e rito
pp. 167-194
Abstract: This article discusses the problem of the tophet, showing the degree to which the understanding of this phenomenon has been conditioned by ancient and modern preconceptions. In addition, the author proposes that the tophet be considered the place of memory in the Phoenician diaspora, in which Punic identity is affirmed and confirmed.

Luca Paretti
Lettere erudite di Sedulio Scoto?
pp. 195-216
Abstract: A newly re-discovered manuscript (Par. lat. 13957) of the so-called Quid sit ceroma – an anonymous 9th century epistle dealing with the various meanings of the word ceroma in antiquity – allows a different reconstruction of the structure of the text, formerly ascribed to Lupus of Ferrières, although not with certainty. Following a revised transcription of the letter according to the new witness, the author offers elements for a new attribution, based mainly on quotations and lexical and stylistic features: the letter could have been written by Sedulius Scottus.

Antonella Amico
«I buoni storici sono cattivi romanzieri»? Il sogno letterario di Gaetano De Sanctis (parte prima)
pp. 217-234
Abstract: Gaetano De Sanctis’ restless and passionate spirit emerges also from some unpublished short stories written between 1929 and 1940. Before his death he considered, although in a very troubled way, publishing them in three collections. The first part of the essay attempts to explain and contextualize the literary divertissement of one of the greatest historians of antiquity.