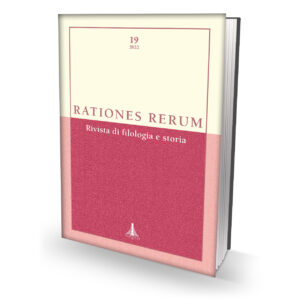 Stefano Struffolino
L’alterna politica di Caristo d’Eubea tra epoca arcaica e classica
pp. 9-37
The southern region of Euboea, dominated by its main center of Karystos and including the ancient sanctuary of Poseidon in Geraistos, has always stood out, as a result of ethnic, geomorphological and climatic factors, for a greater proximity to the Cycladic world rather than to the mainland and the rest of the island. In the 6th and 5th centuries BC, even its political situation seems to experience the consequences of this peculiar diversity: reluctantly forced to submit to the Persians, it was severely punished by Themistocles and constrained to join the Athenian league. The impossibility of avoiding relations with a powerful neighbor creates a fluctuating relationship played out between necessary compromises and the desire to maintain autonomy. The possibility of a cleruchic installation on its territory has long been the subject of debate; the historical and epigraphic sources remain vague, while archaeological evidence does not seem to provide convincing answers. Perhaps some alternative explanation is possible.

Nicola Mancini
Frinico, fr. 4 Snell – Kannicht: alcune considerazioni
pp. 39-50
Phrinichus’ fragment 4 Snell – Kannicht, transmitted by Hesychius (ε 195) and belonging to the tragedy The Danaids, is commonly interpreted as ἔγκαρπα. This is how it is printed in the first volume of the TrGF as well as in some of the most recent editions of Phrynichus. This article carries out a careful analysis of the entry as transmitted by Hesychius’ codex unicus (Marc. Gr. Z. 622) and an investigation of ancient lexica’s modalities of quotation and comment. It argues that the tragic fragment passed down by Hesychius is ἔγκαρτα – the lemma of the lexicon’s entry – and not ἔγκαρπα, which turns out to be an interpretamentum of the commented-upon passage. Some attempts to contextualize the fragment conclude the article.

Thomas R. Martin
A Life Lesson for a Conqueror: Alexander the φρενήρης and Candace of Meroe in the Greek Alexander Romance
pp. 51-77
This article examines the depiction of Alexander the Great as φρενήρης in the Greek Alexander Romance especially in the context of his interaction with Candace, the ruler of Meroe. As the only character in the story so described, Alexander displays his “practical intelligence” in anticipating and overcoming dangers – until he encounters Candace, a Black woman who outsmarts and captures him, thereby teaching him a life lesson about the consequences of underestimating those considered Others based on prejudicial assumptions about race and gender.

Marco Filippi
Esempi di lessico tragico nelle elegie di Tibullo e loro funzione
pp. 79-87
This article provides examples taken from some of Tibullus’ elegies which present references, for the most part formal, to expressions and vocabulary typical of archaic Latin tragedy. A comparison of the various passages examined reveals that Tibullus’ elegies most influenced by these suggestions are those which, by their nature, present a celebratory context and therefore require a high style.

Gianmarco Bianchini – Gian Luca Gregori
Virgilio epigrafico. La prima testimonianza su pietra di Aen. 1, 5-6
pp. 99-114
This article contains a new quotation on stone of Vergil Aeneid 1, 5-6 (multa quoque et bello passus dum conderet urbem / inferretque deos Latio genus unde Latinum). Given its paleographic and stylistic peculiarities, the inscription – of unknown origin – may be dated to the 2nd or early 3rd century AD. A systematic survey of the literary occurrences of these two lines is also given, together with a review of the other cases of epigraphic citations from Virgil longer than one line, either taken out of context or adapted to a sepulchral reference.

Marina Passalacqua
La critica del testo negli epistolari dei dotti carolingi
pp. 115-133
This article deals with passages from the correspondence of the Carolingian scholars concerning textual criticism of ancient texts, to show the diﬀerent problems they encountered – collatio, typology of mistakes, editing – and how they tried to solve them. We can assume once more that the task Carolingian scriptoria took on, trying to ensure the correctness of the transmission of the classics, was the rescue of the cultural project of Roman empire inside the new structure built by Charlemagne.

Gaetano De Sanctis
Sul margine del deserto. Novella. Nota introduttiva di Antonella Amico
pp. 135-172
A short story written by the historian Gaetano De Sanctis in 1932, a few months after his refusal of the oath of allegiance to fascism, is published now for the first time. Sul margine del deserto («on the margin of the desert»), set in Egypt in the 4th century BC, narrates the life of Paphnuti, spent between action in society and contemplation in the desert as an anchorite monk. An introduction by Antonella Amico gives biographical background and some suggestions about literary references.

Martina Gatto
Da Schiller alla Rosa Bianca. Licurgo, Aristotele e due volantini contro il Terzo Reich
pp. 173-190
Between 1942 and 1943, the anti-Nazi group called the White Rose distributed six leaflets against the Third Reich. Although there is an extensive bibliography on these pamphlets, the presence of references to the ancient world has not been adequately investigated. Therefore, this article focuses on two leaflets by the White Rose: the first leaflet, which explicitly mentions the lawgiver of Sparta and its constitution through a quote from a passage by Friedrich Schiller’s essay Die Gesetzgebung des Lykurgus und Solon, and the third leaflet containing a quote from Aristotle’s Politics on the tyranny of Syracuse.

Antonino Nastasi
Iscrizioni in latino postunitarie di Roma: un aggiornamento
pp. 201-228
This article offers some addenda to my book entitled Le iscrizioni in latino di Roma Capitale (1870-2018) (Rome, Quasar, 2019). Inscriptions from Villa Blanc (Via Nomentana) and some residential buildings in Via Minturno, Via Gabrio Serbelloni, and Piazza Verbano, all dating to the period 1897 to 1930, are published here for the very first time. Inscriptions from the former hospital «Carlo Forlanini» (1934) are published in a corrected edition that replaces their flawed transcription of 1940. Additionally, the article reveals the authors of the inscriptions of the INA buildings in Via Sallustiana and Piazza Sant’Andrea della Valle, as well as of the inscription at the entrance of the rectorate of the Sapienza University (which is no longer extant). It is moreover demonstrated that an inscription in the Rione Monti was later deleted. Finally, two very recent inscriptions (2019) are published here for the first time.