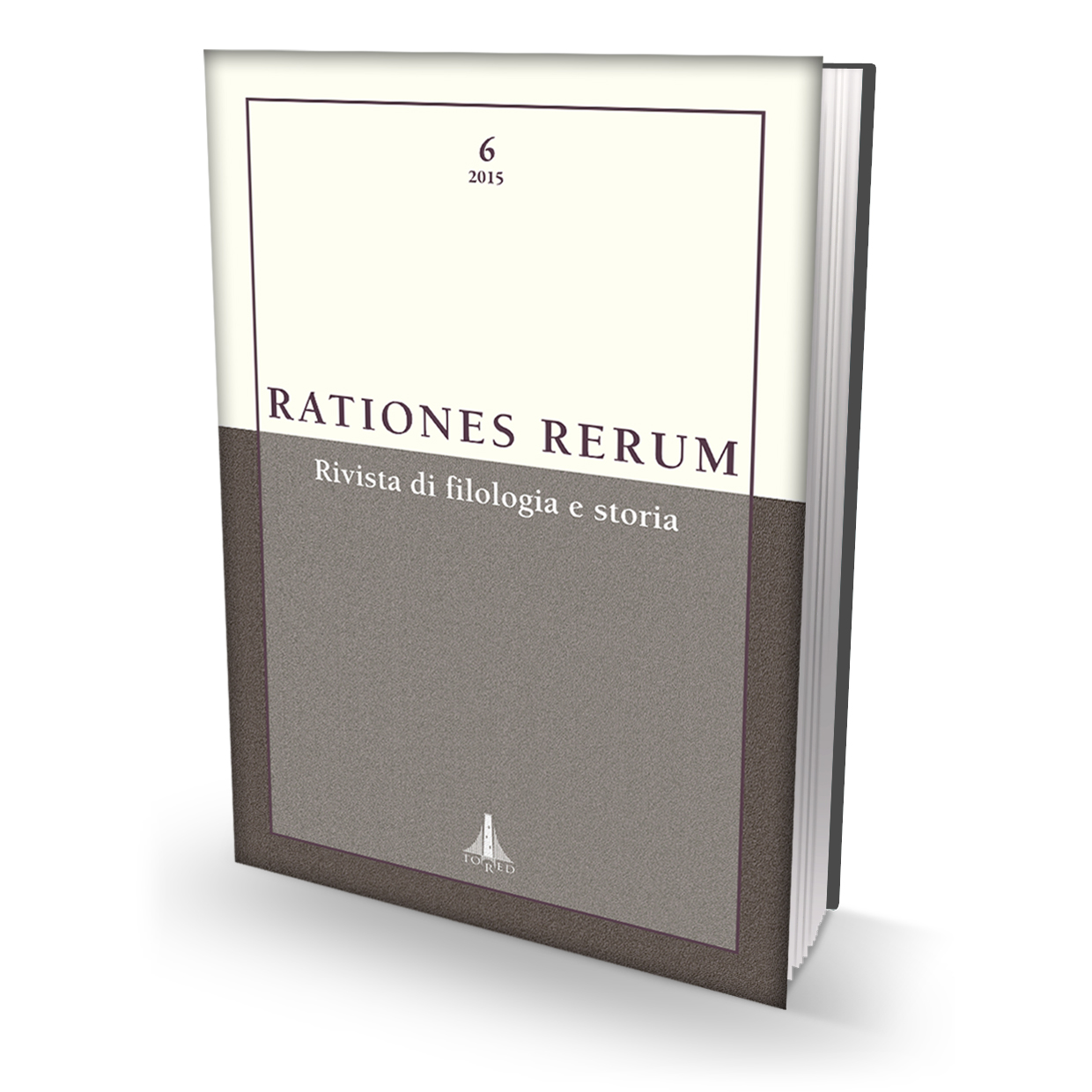 Alessandro Brambilla
Epariti. Il koinon degli Arcadi e i suoi soldati
pp. 9-32
Abstract: Among the many elite troops of Classical Greece the Arcadian eparitoi seem to be peculiar both for the number of their members and for their composition. As an analysis of the extant sources suggests, their earliest core was formed by rich men serving the federal authorities, although less wealthy citizens could also have joined them. The eparitoi could ultimately be interpreted as a military force controlled by federal magistrates and clearly distinct from the actual federal army.

Giovanni Frulla
Influssi della lingua ebraica nei frammenti di Ezechiele il Tragico
pp. 39-54
Abstract: The purpose of this study, dealing with the language of Ezekiel the Tragedian’s Exagoge, is to investigate the influence of the Hebrew language on Ezekiel’s Greek style and to shed light on some difficult or obscure passages.

Guido Migliorati
Gli inizi della storiografia romana e la teoria greca della storiografia. A proposito di Q. Fabio Pittore (seconda parte)
pp. 55-84
Abstract: Fabius Pictor wrote his historical work as a guide to contemporary events (the wars against Carthage and the Gauls), but also as a balance of the history of Rome from the foundation of the city to the conquest of the Mediterranean world after Hannibal’s defeat.

Michele Bandini
Cic. Hort. fr. 15 Grilli
pp. 85-90
Abstract: An emendation by the last editor, A. Grilli, to Cic. Hort. fr. 15, which contains a series of judgements on Greek historians, is here submitted to close scrutiny. Grilli, as did Usener before him, wanted to add Xenophon to the Greek historians named in the fragment (Herodotus, Thucydides, Philistus, Theopompus, Ephorus). An examination of the references to Xenophon in Cicero’s works, and, more generally, of ancient literary criticism on Xenophon, suggests that Usener’s and Grilli’s emendations must be rejected.

Marco Filippi
Properzio e la tragedia latina arcaica
pp. 91-112
Abstract: Through a comparison of select Latin tragic fragments with some passages of Propertius’ elegies it is possible to show that the latter did not use myth as an end in itself but always for specific purposes; for this and other reasons he cannot be defined an “unclear poet”.

Salvatore Monda
La cosiddetta Atellana imperiale
pp. 121-147
Abstract: This paper deals with the survival of the fabula Atellana from the Augustan age onward. Some theatrical performances of Atellan plays are still attested during the 2nd century AD, and it is possible that the Oscan farce was still performed on stage in the 4th century. It is also likely that plays with a carefully conceived plot and well-written dialogues, reflecting more closely the metrical structure of the ancient palliata, coexisted with impromptu performances based on a fixed repertoire of characters, situations and jokes.

Marina Passalacqua
Dante, Virgilio, Ennio
pp. 149-160
Abstract: The paper discusses the possible echoes in Dante, Inferno 31, 18 of Verg., Aen. 9, 503-504, and Enn., Ann. 451 S. We know the verse of Ennius through Priscianus’ Ars (full text) and Servius’ commentary on Virgil. During the Carolingian Renaissance (9th century AD) several copies of Priscianus’ Ars were available at the scriptorium of Reims and the passage of Servius was emended with the complete quotation by Ennius, as shown in ms. Vat. Reg. lat. 1669. Servius’ commentary was very popular in France and Italy during the 14th and the 15th centuries, and it is highly probable that Dante, who read the Aeneid in a contemporary manuscript containing Servius’ commentary, was inspired by the sonitus terribilis in conceiving the verse concerning Roland.

Yorick Gomez Gane
«Et il tutto resti inter nos»: Galileo Galilei tra italiano e latino
pp. 161-188
Abstract: The paper studies the use by Galileo Galilei of the Italian and Latin languages as vehicles for scientific communication. After taking note of his preference for Italian and explaining the reasons behind this choice highlighted by scholars, the Author presents some additional reasons: the greater richness and clarity of the vulgar (an intrinsic characteristic enunciated by Galileo himself and confirmed by the comparison of passages translated by him from one language to the other), and the important precedent of the technical treatises by Vincenzo Galilei, Galileo’s father, in vernacular and in dialogue form. Worthy of note, in passing, is the usefulness of the Portale Galileo corpus for the study of the Galilean vocabulary (thanks to which, e.g., we can backdate the Italian noun satellite to 1612). The article points out, in conclusion, that the use of Latin, which is much less frequent than the use of Italian, is based on contingent reasons but not to be considered unwelcome to Galileo or unsatisfactory (as in the Discorsi … intorno a due nuove scienze).