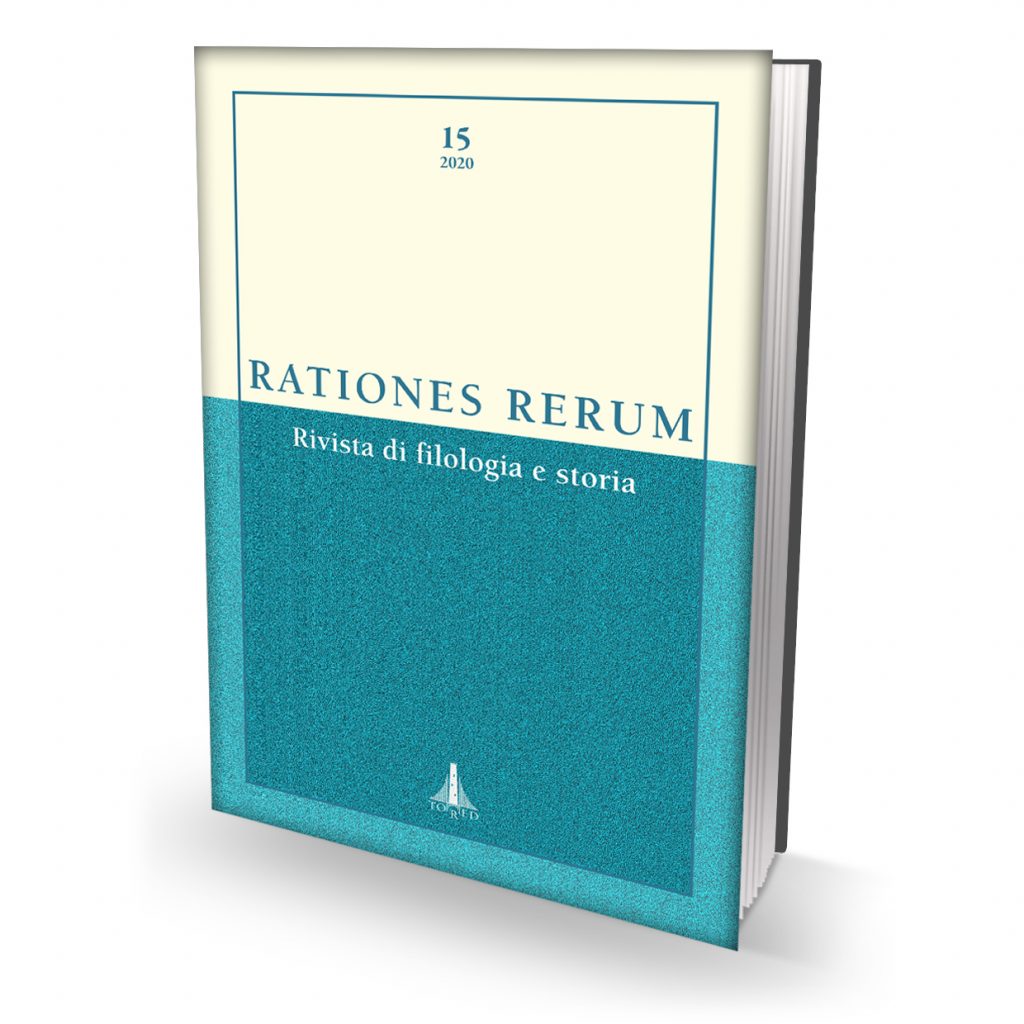 Stefano Struffolino
Ἰσοτιμία πᾶσιν ἔστω. Gli astragali, la liminarità e il gioco dell’uguaglianza sociale
pp. 27-52
A consideration of evidence for the game of knucklebones as played by masters and slaves, in the context of festivals in which ritual situations of social reversal took place, opens the way to some interesting observations on the value of these objects, which are much more than simple playthings. What seems to emerge is their characterization as liminal and apotropaic objects, capable of bringing together, albeit in a transitory way, different levels of reality both from a social and metaphysical point of view in the religious sphere – funerary, votive, and divinatory ceremonies, as well as also in some customary or institutional practices.

Emanuele Seretti
L’emulo di Pan: una nota a Verg. Ecl. 2, 32-33
pp. 53-62
This article discusses, once more, the authenticity of Verg. Ecl. 2, 32-33. These odd verses, irrelevant for Corydon’s “court”, fragment the syntax and have no connection with the previous or the following parts of the eclogue; moreover, neither Theocritus nor Vergil’s imitators (Calpurnius, Ovid, and Nemesianus) use similar verses. On the other hand, the excision of vv. 32-33 could restore, according to Maury’s theory, the symmetrical disposition of Ecl. 2-8 and Ecl. 3-7.

Luigi Di Raimo
Elegia, retorica e tragedia. L’error ovidiano tra purgatio e ἁμαρτία
pp. 63-83
The Tristia and the Epistulae ex Ponto are, first of all, literary works. Even during his exile, Ovid continued to “contaminate” different genres, and his incessant experimentation allows us to read his exilic elegies as products of the conventions of rhetoric and tragedy. This article examines the implications of this hypothesis by analyzing the double meaning of the word error, used by the poet to describe his misfortunes. Setting aside the historical speculations about Ovid’s relegatio, this article tries to shed light on his “mistake” through the rhetorical concept of error and the tragic idea of ἁμαρτία.

Tiziano F. Ottobrini
Plato Copticus. Intorno alla parvenza nella traduzione copta di Plato Rsp. 588b-598b
pp. 95-108
This article aims to explain more philosophico the relationship between Plato’s Republic 588b-589b and its “translation” into Coptic (middle of the IV century). The Coptic version pays more attention to the lexicon of imagery than Plato did, although it is not clear why this happens and what it really means. It will be also pointed out why the “translator” deals with the tripartite soul only in relation to this passage of Plato’s Republic and not, for instance, to the passage in Phaedrus (the famous winged chariot). It is argued that the main reason is the stress on the opposition between homo interior and homo exterior, which appears in Republic and draws attention to the forms of image.

Marina Passalacqua
Femina / res publica in malam partem da Plauto a Ildeberto di Lavardin
pp. 109-113
This article deals with the lemma publicus and its peculiar meaning in Latin literature in relation to the world of prostitution. After a rapid survey of a panorama of examples, from Plautus to the Carolingian period, attention is focused on the section De muliebri amore of Hildebertus of Lavardin’s Carmen 50 Scott, where femina is abused as res publica; the relevance given in that context to this expression is the key for understanding the political and intellectual ideology of that time.

Monica Campanini
Il βίος di Alessandro nel lessico Suda: una proposta di lettura
pp. 115-149
The goal of this article is to identify the structure and sources of the Suda’s entry on Alexander the Great. Some of the authors followed by the entry’s compiler, such as Arrian and John of Antioch, have already been identified. Nevertheless, it is possible to add to the list of sources another historian, Polybius, and to identify his connections with the above-mentioned authors, in order to understand the image of Alexander under the Byzantine empire and to attempt a new interpretation of his reputation in that cultural context.

Antonella Amico – Gabriele Matteo Caporale
«Con religioso, reverente amore»? La Curia dai dibattiti parlamentari dei primi del ’900 alla consegna al Senato del regno
pp. 151-197
During excavations in the Roman Forum, Rodolfo Lanciani identified the Curia Iulia – the seat of the ancient Senate – with the church of Sant’Adriano al Foro (1883). The first in-depth study of the site, by Giacomo Boni in 1900, opened a long and passionate debate in the Italian Parliament and newspapers about the monument, which was purchased by the State only in 1922. In 1930 Alfonso Bartoli began restoration work commissioned by the Fascist regime, but the decision to return the ancient Senate to the form it had in the age of Diocletian led to the removal of the medieval and baroque superstructures of Sant’Adriano. On May 9, 1939 the Italian Senate held a session in the rebuilt Curia with the participation of Benito Mussolini and other high representatives of the Fascist regime. The Curia was used by the Senate until 1947.

Daniele Fusi
Text Searching Beyond the Text: A Case-Study
pp. 199-230
This article represents a complementary supplement to Fusi’s articles about his metrical analysis system, with the double intent of illustrating further methodological aspects through a concrete scenario, and presenting a system demonstrating how architectural and modeling choices can make it usable even outside its original purposes. The argument illustrates the requirements and data modeling of a modern, lightweight, and highly integrable philological text search engine, based on concordances and text structures. In the metrical analysis scenario, where it represents one of the possible presentation methods for a much higher and complex data set, its usage provides a concrete case of integration of textual and metatextual data, merged from a number of different sources, either inside or outside the input documents and the boundaries of the software system itself, including third-party functionalities like POS tagging and lemmatization from popular natural language processing libraries.