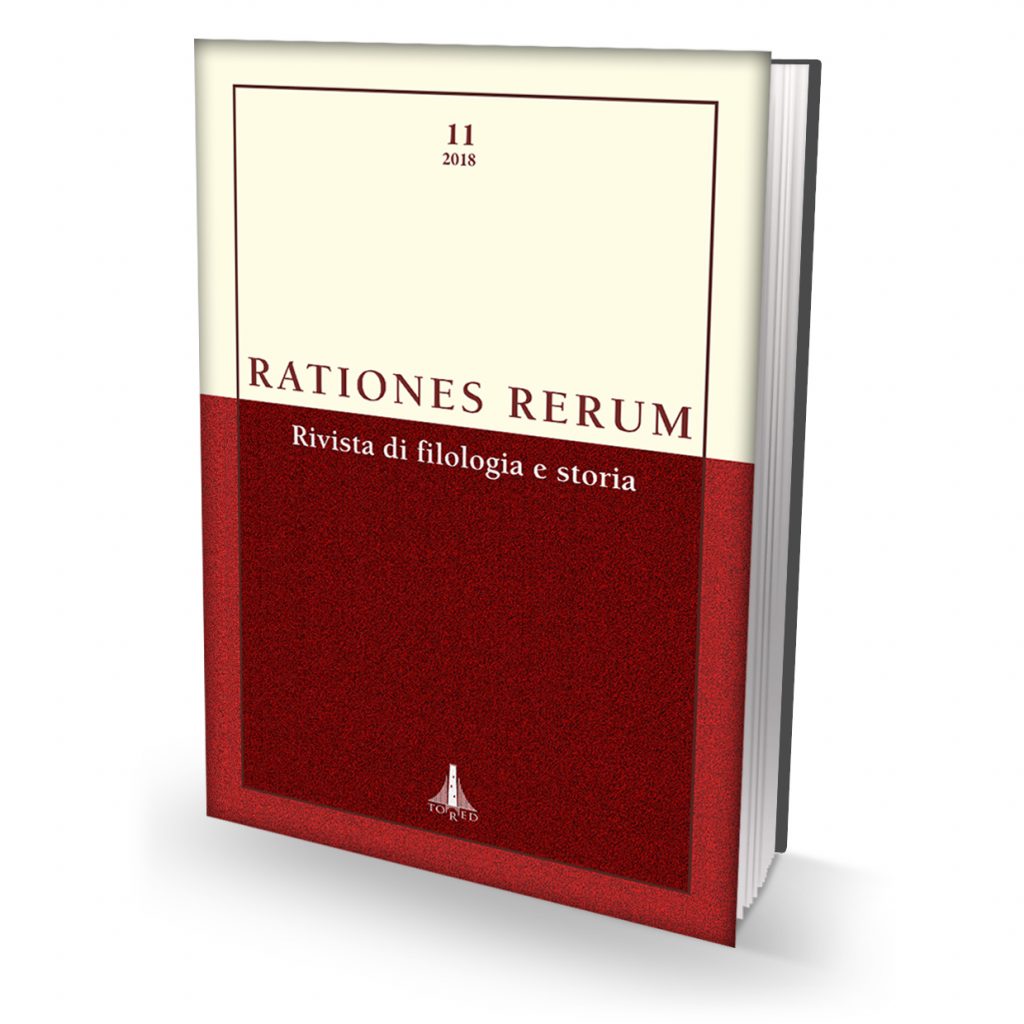 Maria Accame
Il viaggio di tre monaci alla ricerca del Paradiso terrestre
pp. 9-30
The article examines three vernacular editions of the story of three monks setting off to the east in search of the earthly Paradise. Among the sources of this legend is a tale preserved in the Vita sancti Macharii, but the vernacular versions present several variations; in particular, F1 (Florence, Biblioteca Nazionale, Magliabechiano XXXV 221, ff. 36r-46v) has significant additions revealing the author’s effort to attract the attention of a bourgeois public that, especially in the 13th-14th centuries, loved this genre of wonderful stories describing fictional lands and peoples.

Antonella Amico
«Piero mio» – «Mio caro, caro maestro»: un rapporto sull’orlo dell’abisso. Uno sguardo al carteggio tra Gaetano De Sanctis e Piero Treves
pp. 31-59
The relationship between two distinguished historians of the 20th century, Gaetano De Sanctis and Piero Treves, is still little known. Through their correspondence, however, conserved in the archive of the institute of the italian encyclopedia, Rome, it is possible to trace the profile of a troubled collaboration characterized by filial benevolence, methodological contrasts, religious crises, and political convictions. In the 1930s, after refusing to swear an oath of loyalty to Fascism, Gaetano De Sanctis exercised great care for the fate of his pupil Piero Treves, son of Claudio, a socialist activist exiled by the regime and a personal enemy of Benito Mussolini.

Gabriele Matteo Caporale
Il «sentimento della riforma»: Ruggiero Bonghi e il Regolamento della Camera dei Deputati
pp. 61-83
Ruggiero Bonghi was a prolific journalist, eclectic academic, and expert parliamentarian, but his contribution to the evolution of the Chamber of Deputies Rules has not been adequately investigated. Bonghi was among the promoters of the first attempt to introduce into the italian Parliament specialized legislative bodies (the Giunte and the permanent committees, in place of the Uffici of the French tradition). After a controversial debate begun in 1870, the Bonghi reforms were finally passed between 1887 and 1891.

Valerio Casadio
Edipo sulla via di Colono? (Eur. fr. 554 B Kannicht)
pp. 85-94
The intricate and in many ways obscure plot of euripides’ fragmentary tragedy Oedipus seems to end with the invocation of fr. 554 b Kannicht, which envisages a final destination for the Theban king in Attica, one that is both similar to and different from that narrated in Sophocles’ Oedipus at Colonus.

Virgilio Costa
In officina Philochori. L’arcontato di Apollodoro (350/49a.C.) e i confini della hiera orgas
pp. 95-109
A brief passage of Demosthenes’ Speech 13, two fragments of the atthido-graphers Androtion and Philochorus, and a famous eleusinian inscription (IG II2, 204) on the reassessment of the boundaries of the territory between eleusis and Megara sacred to Demeter allow us to reconstruct, on the whole, the chronology of a certain limited conflict of the 4th century BC.

Donatella Erdas
Malattie di tiranni. Su alcune tradizioni aristoteliche relative alle tirannidi di Sicilia
pp. 121-132
The Aristotelian accounts of the Sicilian tyrants Gelon and Hieron, in two surviving fragments of the Geloan and Syracusan politeiai, focus almost exclusively on their illnesses. These tales may be compared with the description of Dionysius II of Syracuse as a constantly ill and drunk tyrant in the Politics and in the Syracusan politeia. Starting with some reflections on illness as one of the peculiar features of the Aristotelian description of tyranny, this article aims at demonstrating that Dionysius II served as a strong contemporary model for the development of the Aristotelian image of tyranny. Therefore, it can be inferred that Aristotle and the Peripatos use the portrait of the tyrant emerging from the case of Dionysius II to sketch out the image of Gelon and Hieron as tyrants struggling with (and succumbing to) their illness.

Paolo Garofalo
Un’iscrizione funeraria inedita dal territorio di Cisterna (LT)
pp. 133-141
This article presents an unpublished inscribed and fragmentary grave slab found at Cisterna di latina and originating from Bufaloreccia, on the Appian Way, near a large mausoleum with a cylindrical floor plan of the second half of the 2nd century AD that belonged to the ager of the Ulubrae municipium, a little town on the slopes of the lepini mountains between Cora and Norba. The dedicatee of the inscription is a Iulia whose condition is unknown; however, it is worth noticing the recurrence of this gens in the ulubran territory, which some sources identify as the original land of Augustus’ paternal family.

Alessandra Inglese
Formularità nei decreti di prossenia della città di Arkesine (Amorgo) fra IV e III secolo a.C.
pp. 143-158
Between the 4th and the 2nd centuries BC, Arkesine, one of three poleis of Amorgos in the Cyclades, honored various foreigners as proxenoi via decrees. Analysis of the enactment formulas in these decrees and their comparison with the city’s best-known honorific decree for the Athenian Androtion (author of an Atthis and governor of the island in a time of social conflict) provide interesting information on the careful use of honors by the Arkesinean Chanceller y, on changes in the enactment procedures, and on Arkesine’s foreign relations.

Rafael Antonio Sáseta Naranjo
Paideia y geografía: Aristóteles contra Alejandro
pp. 177-190
The paper explores the well-known breaking off of relations between Aristotle and Alexander before the latter’s expedition into Asia. The Macedonian king was inclined to regard as Greeks all the barbarian peoples who adopted Hellenic culture, regardless of their ethnic origin. This idea, recalling the Panhellenic ideals sponsored by Isocrates, generated opposition from Aristotle, who still regarded Greece as the center of world. The extension of Greek culture to the east broke that archaic model and created a strict relationship between paideia and geography.