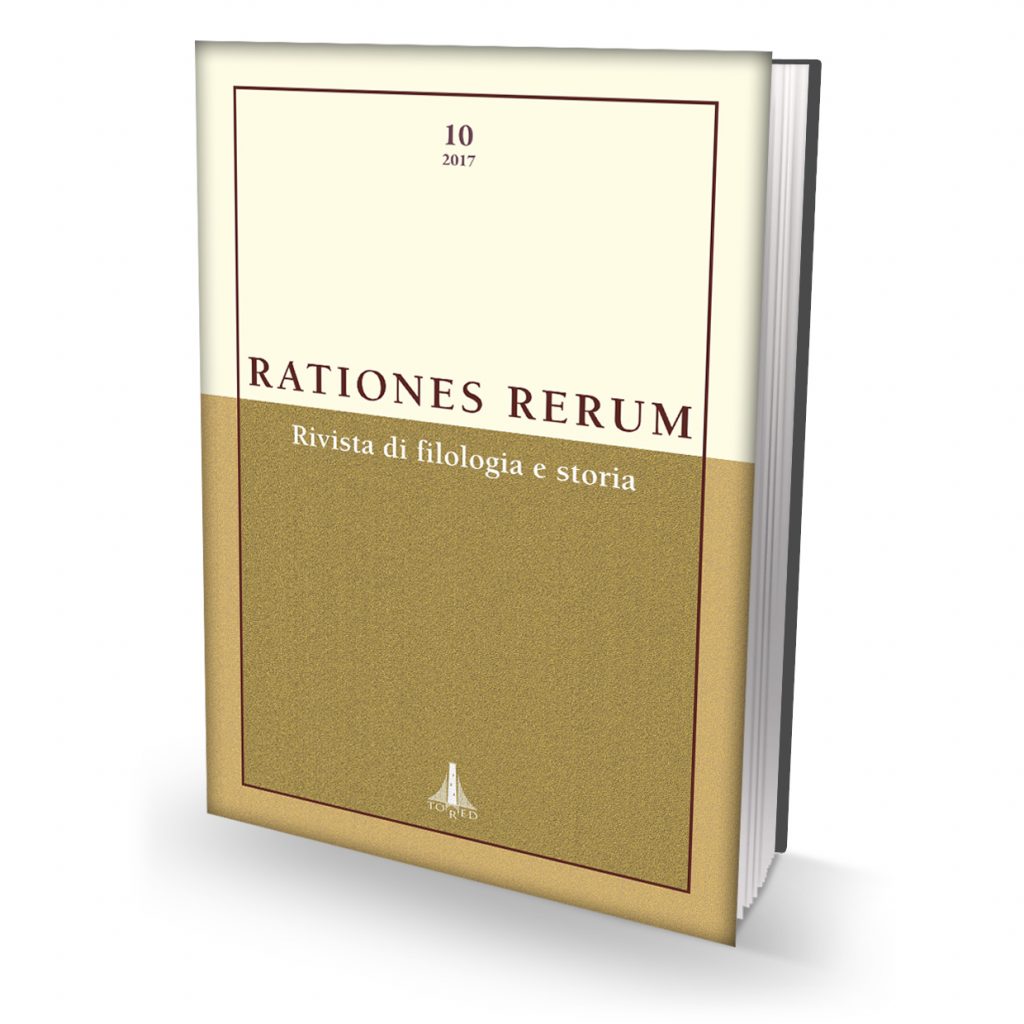 Albio Cesare Cassio
Sbagli d’oro: dialetto, manipolazioni ed errori nella laminetta di Hipponion
pp. 15-27
This article deals with the gold foil from Hipponion, its text, and its modern editions and interpretations. The main focus is on the typolog y of the mistakes made by the ancient engraver as well as by modern scholars, supplemented by observations on the language of the gold leaf in relation to both its archetype(s) and epic language at large. In addition, a specific Homeric model for lines 8f. has been identified.

Luca Bettarini
Errori della tradizione, “errori d’autore”, forme genuine. Il caso degli iperdorismi nel corpus dei bucolici greci
pp. 29-47
Recent studies have shown that hyperdialectal forms, well attested in inscriptions of the Hellenistic age, cannot simply be treated as mistakes when they are transmitted in Hellenistic texts (e.g. the Doric hymns of Callimachus). Moreover, these forms could also be used as a consequence of their presence – rightly or wrongly – in the Hellenistic editions of archaic and classical poets. On this basis, this article surveys the hyper-Doricisms of Greek bucolic poetry and argues that in several cases they could be genuine.

Eleonora Tagliaferro
“Errori” nella Bibbia: tra Settanta e testo masoretico
pp. 49-68
In the case of the Hebrew Bible, the concept of “error” is open to extensive debate, as is the idea itself of a critical edition of the Hebrew Bible. The divergences between the Hebrew text and the Greek text of the Septuagint are numerous and of various kinds, from the elimination of divine anthropomorphism, to the insertion of messianic traits, to Hellenization in the conception of the human and the divine. At the textual level, faced with two non-equivalent terms, we can hypothesize a “mistake” in the reading of translators, or the possibility that the translators had a different Hebrew Vorlage in front of them that agreed with the Qumran texts or with other versions. This article discusses some paleographic variations between the Masoretic Text and the Septuagint, as well as other cases involving the ideolog y of translation rather than the technique of translation.

Salvatore Monda
Errori di trasmissione ed errori di citazione nei frammenti scenici latini
pp. 69-86
This article deals with various kinds of errors that are quite common either in the fragments of Latin playwrights or in the ancient quotations from extant dramatic texts (the so-called indirect tradition). The errors may belong to the source citing a given passage (misquotation), the source’s manuscript tradition (scribal error), or even both; it is very diﬃcult to identify securely the attribution of an error and the source(s) of its origin. The passages examined are the following : Ter. Ad. 117; Naev. com. 50-51 R .³; Cic. ad Att. 7, 3, 10; Liv. Andr. com. 8 R .³; Naev. com. 1 R .³; Titin. Barbatus; Naev. Nervolaria; Naev. com. 65 R .³; Caec. com. 59-60 R .³; Naev. trag. 16 R .³.

Paolo De Paolis
Le conseguenze dell’errore
pp. 87-114
Through the analysis of two case studies, this article discusses the consequences that wrong or false attributions of ancient works have had on their fortunes and on modern scholarship. The first concerns the false attribution to Cicero of the Rhetorica ad Herennium, which can be dated to the years between the end of the 1st century A.D. (Quintilian) and the end of the 2nd (Flavius Caper); the text’s subsequent fortune was due to this false attribution, which was questioned only in the Humanistic age. The second case concerns two pseudepigraphic works that manuscripts attribute to Caper but are instead late compilations. Keil’s ambiguity in dealing with them resulted in their attribution, in many linguistic studies, to an older age of linguistic phenomena that are instead datable to the later period in which the two compilations were done.

Mario de Nonno
Errori guida ed errori d’archetipo nell’Institutio de arte metrica di Marziano Capella
pp. 115-141
This article analyzes the textual relationships between the three witnesses of the still unpublished Institutio de arte metrica by Martianus Capella, with methodological observations on the nature and typolog y of the errors that can be observed in the manuscripts and a reconstruction of the stemma codicum. It also offers, in preview, the editio princeps of sections I-II (§§ 1-7) of the new text, with Italian translation and explanatory notes. The appendix provides an analytic description of the Florence manuscript, Biblioteca Laurenziana, Conventi Soppressi 48, which until now has been only sketchily reported.

Marina Passalacqua
Quid est veritas? I mss. Royal 15 a XXXIII e Par. Lat. 8786 e il commento di Remigio di Auxerre al De nuptiis Philologiae et Mercurii di Marziano Capella
pp. 143-155
This article deals with the mss. London, BL, Royal 15 A XXXIII and Par. Lat. 8786, both containing Remigius’ commentar y on Martianus Capella, De nuptiis Philologiae et Mercurii with corrections by Gerbertus of Aurillac, and examines their mutual relationships. The Carolingian scriptoria prove, once more, to have been true laboratories for reading, writing, and correcting texts through the use of different copies, and reveal to us the work in progress behind the teaching manuals.

Giorgio Inglese
Congiuntivo, non congiuntivo, separativo non separativo (con esempi dalla tradizione della Commedia)
pp. 157-162
This article reconsiders the standard definition, since Maas’ Textkritik, of the “conjunctive” and “separative” error. It verifies its adequateness in the cases of traditions that are “thick”, distant in time, and contaminated ab antiquo, such as that of Dante Alighieri’s Comedy. Standing apart from the work of previous scholars, the author examines the following significant passages: Pg 2, 79-81; Pg 2, 124; Pd 10, 112; Pg 2, 107; Pd 8, 46; Pd 28, 136.

Francesco Lo Monaco
Lorenzo Valla o della possibilità dell’errore
pp. 163-175
This article focuses on some ambiguities in the stemmatic positioning and “author’s mistakes” in several works of Lorenzo Valla (translations from Herodotus and Thucydides, passages from the Antidotum in Facium) to highlight that, in traditions characterized by a plurality of testimonies, even if they are chronologically very close to the author’s era, the transmission process is anything but linear.

Maurizio Campanelli
In errorum fovea languentes. Esportare la filologia nell’età degli incunaboli
pp. 177-220
The age of the incunabula was the period in which humanistic philology reached full maturity, but it was also the period in which the disciplines with the clearest medieval heritage, such as jurisprudence and medicine, started to be permeated by philolog y. If modernity was born when humanists’ methods were adopted in other cultural domains, the advent of printing was the key moment of this birth, since printing created a communal environment in which the method of research could be shared out, starting with the basic problem of the constitution of texts. This article proposes an initial survey of the ways and forms in which the humanists’ philological method was adopted during the age of incunabula and put to good use in other disciplines.

Paolo Italia
Errori in rete. Editing 2.0
pp. 221-234
Starting from the conception of the text as a process, this article proposes an interpretative category for digital texts that combines the spatial dimension with the temporal dimension (diachrony as a discrete sum of textual syncs), one that is better suited for considering the category of network errors and their corrections. With respect to digital texts, three elements are crucial: 1) the recognition of the norm; 2) the distinction between error and innovation; 3) the conservation of “innovation” i.e. the amendment of error. These operations are facilitated, not hindered, by the huge amount of online available data, provided that a philological approach and a careful verification of the meaning in the given context are two essential criteria for guiding the web user, who must mediate, by developing a “philological culture of error”, between a conservative attitude towards forms and spellings and the general tendency to simplify linguistic forms in the digital world