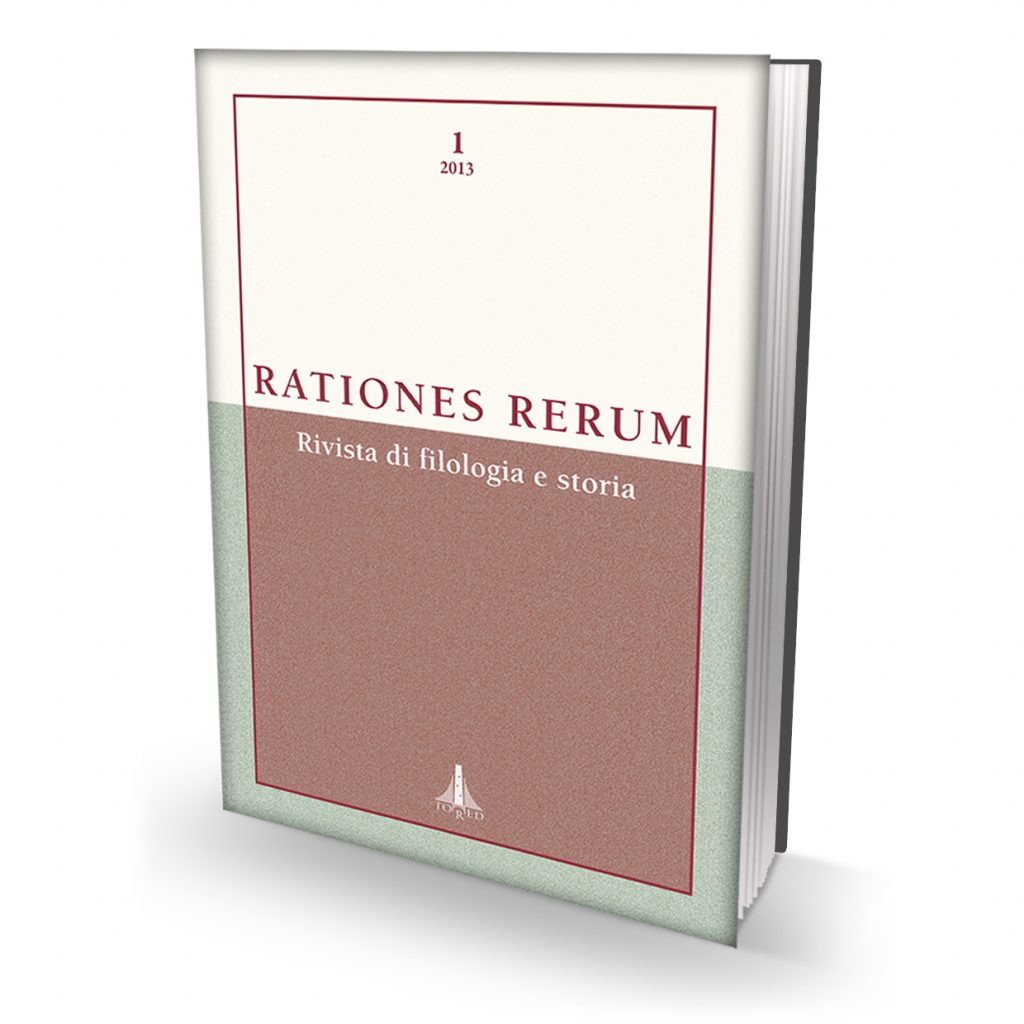 Werner Eck
Comprendere contesti. Il nuovo Corpus Inscriptionum Iudaeae / Palaestinae multilingue
pp. 17-38
Presentation of volumes I 1-2 and II of the Corpus Inscriptionum Iudaeae / Palaestinae (CIIP); explanation of the goal of the Corpus and the methodology used; short analysis of the inscriptions found in Jerusalem and Caesarea according to time and language; some remarks about the future volumes of the CIIP.

Federica Cordano
Magistrature megaresi dalla Grecia al Mar Nero
pp. 39-54
The ancient Greek cities on the Black Sea and the Bosporus developed an extraordinary devotion to their historical background, since they felt the need of showing their cultural identity towards the non-Greek neighbours, the other Greek peoples, and, finally, the Macedonian and Roman rulers. The paper focuses on some public Megarian institutions and, in particular, on the role of the eponym magistrates, of the strategoi, and of the so-called aisymnetai.

Valeria Foderà
Gerione in Ecateo di Mileto (FGrHist 1 F26). Alcune considerazioni per una nuova interpretazione
pp. 55-68
A well-known fragment of the Genealogies of Hecataeus of Miletus (FGrHist 1 F26) locates the kingdom of Geryon not in the Iberian Peninsula, as Hesiod believed, but in Epirus. Hecataeus may have derived his version from an ancient group of local traditions, some of which coming from Corinth.

Lorenzo Fati
Trogo, prol. 27 e la battaglia di Andro
pp. 69-84
It is commonly believed that the battle of Andros was fought in 246/5 BC, during the Laodicean war, and was won by Antigonus Gonatas (cf. e.g. Walbank, A History of Macedonia, III, 1988, pp. 587-600; Buraselis, Das hellenistische Makedonien, 1982, pp. 119-145). On the basis of the sources now available, however, this theory is no longer acceptable; it is more likely that the battle was fought after 230 and was won by Antigonus Doson.

Luca Arcari – Carmine Pisano
Linee guida per un corpus della storiografia greca frammentaria sul mondo ebraico. Artapano, FGrHist 726 F3A, 1-9 e la figura di Mosè/Mouso
pp. 85-114
The article illustrates the guidelines of a new edition of the fragments from Hellenistic Jewish historians. A close analysis of Artapanus, FGrHist 726 F3a, 1-9 shows that this literature was not primarily aimed at promoting the dialogue between Jews and the other peoples, but is an expression of the intra-Jewish debate between those who refused any form of assimilation and those who, on the contrary, sought to reformulate “Jewishness” in a new cultural and historical context.

Maria Cristina Zerbino
Taceo in Plauto: quando dire non è fare
pp. 115-147
In Plautus’ Poen. 262 the adulescens Agorastocles, replying to his servant Milphio’s taceo, wittily remarks si tacuisses, iam istuc ‘taceo’ non gnatum foret. In fact, taceo (“I shut up”) is a paradoxical utterance, which, taken at face value, means the opposite of what it states. The contradiction between saying and doing is likewise humorously stressed in Ps. 209. The article examines the sixteen instances of taceo after directive expressions in Plautus’ comedies, showing that, in most cases, it occurs within comic routines that delay the progress of the action and that, predictably, the utterer never shuts up thereafter. In all those instances, what matters is the relational meaning of the expression, its illocutionary force, implying the speaker’s intention to please the other. On three occasions, only the expression works as a stage direction marking the exit of the character. Significantly enough, the pun on the paradoxical taceo takes place in plays like Poenulus and Pseudolus where both the power and the unreliability of speech are staged.

Ilaria Sforza
Il Περὶ ’Ιουδαίων dello pseudo-Ecateo
pp. 149-164
The paper focuses on some fragments of a pamphlet on the Jews doubtfully attributed to Hecataeus of Abdera (4th c. BC); special attention is devoted, in particular, to a passage of Josephus’ Against Apion 1, 183-204 (Hecat., FGrHist 264 T7a and F21) which tries to demonstrate the interest and respect of the ancient Greek authors towards Jewish culture.

Francesca Romana Nocchi
Imago est animi voltus. La maschera fra teatro e oratoria
pp. 165-199
Quintilian often used scenic art as a term of comparison in order to impart the future orator with his precepts about the instrumental use of facial expression. In this regard, the Institutio oratoria provides clues which are useful in clarifying the rules for the implementation of shows and technical devices used; as regards the use of the mask, in particular, it seems possible to deny their general use in imperial times.

Antonino Nastasi
Gaetano Koch, Giulio Podesti e il “salubre Esquilino” oraziano. Un dialogo epigrafico tra architetti nella Roma di fine ’800
pp. 201-215
The urban transformation of Rome, after the proclamation of the city as capital of unified Italy, led to the erection of several buildings bearing Latin inscriptions. Palazzo Costanzi, built by Gaetano Koch in 1878 in front of Piazza dell’Esquilino, shows a quotation from Horace (Serm. I 8, 14), who alluded to Maecenas: “Now it is possible to live on the healthy Esquiline Hill”. A reply to this statement is offered by an inscription carved on Palazzo Bassi (1887); here the building itself claims that the new Corso Vittorio Emanuele II does not envy the healthy Esquiline Hill. By quoting the same Horace’s words, the architect of Palazzo Bassi, Giulio Podesti, stressed the beauty of his work in comparison to Koch’s.

Maria Barbara Savo
Il fondo epistolare Paola Zancan: alcune lettere inedite
pp. 217-237
During the Fascist regime, the University of Padua, thanks to a fortunate series of circumstances, could enlist many illustrious names of Italian culture, some of which, moreover, played a significant role in the fight against totalitarianism. One of them was the historian Paola Zancan. Today, thanks to the rediscovery of the letters addressed to her by many famous scholars of antiquity, it is possible to shed further light on a figure that broke the limits imposed to women by social bias in the first half of XX century.