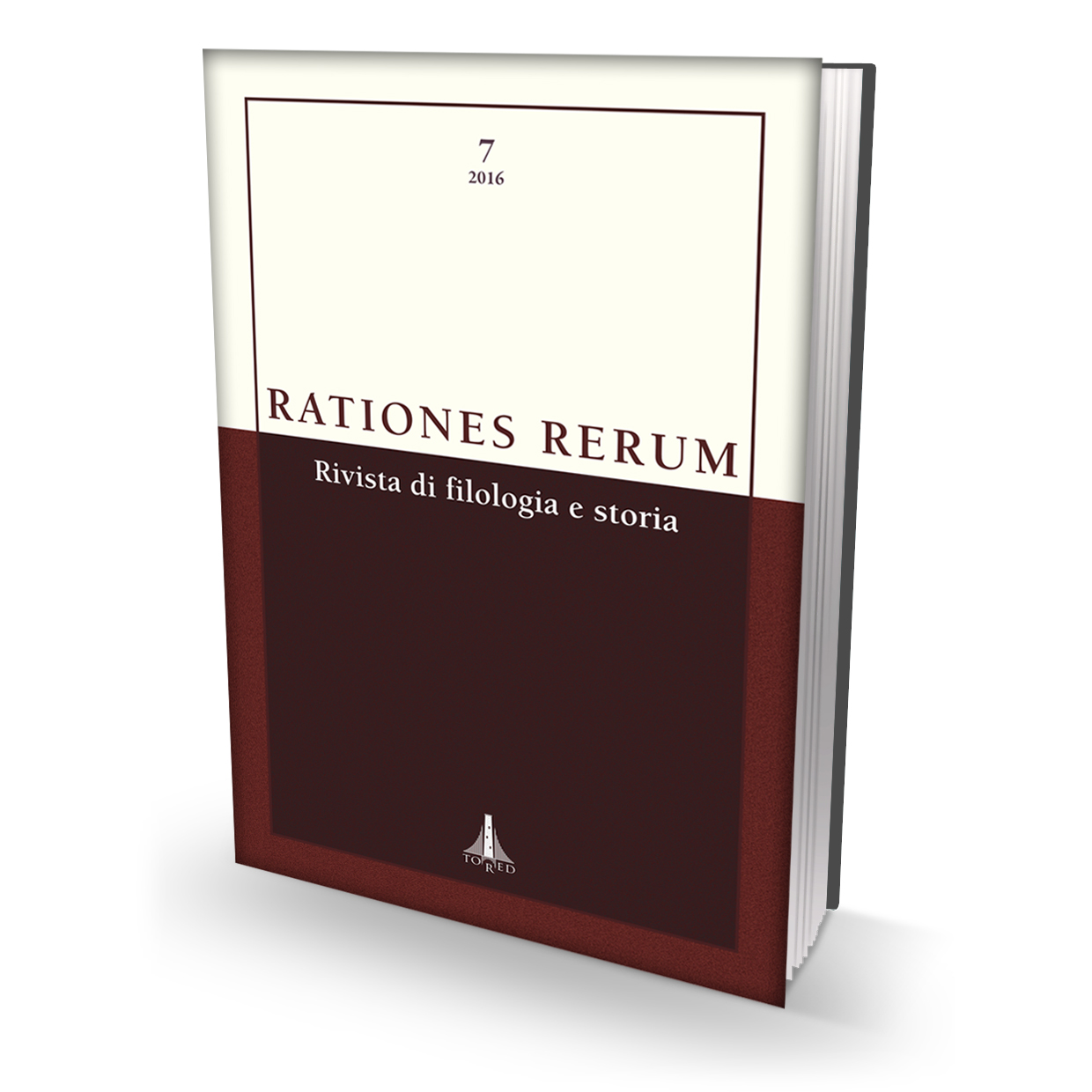 Simone Podestà
Arimaspi e Monti Rifei: Damaste di Sigeo in Plin. Nat. 88-89?
pp. 9-32
Abstract: This article investigates the possible sources underlying a passage of Pliny’s Naturalis Historia concerning the northern peoples of the earth. Special attention is devoted to a passage of Damastes of Sigeion (5th 4th c. BC) on the Hyperboreans cited by Stephanus of Byzantium, in order to clarify to what extent the Latin tradition about the northern populations derives from Damastes.

Ester Cerbo
Un epicedio per Troia. Lettura metrico-ritmica di Eur. Troad. 511-567
pp. 33-68
Abstract: This article offers a metrical analysis of the first stasimon of Euripides’ Trojan Women. The prevailing use of the iambic rhythm, mostly in the form of dimeters, seems to have three main objectives: first, to express the captive women’s lament; second, to suggest – due to the content and the dramatic setting of these verses – their affinity with a ῥῆσις ἀγγελική; and, third, to enhance the verbal message through a simple and iterative melody.

Anna Pasqualini
Le istituzioni albane tra mito e storia
pp. 69-90
Abstract: This article argues that Alba Longa, the birthplace of Romulus and Remus, has never been found because it never existed, being only the mythical capital of the Nomen Latinum created by the Roman annalists to fill the chronological gap between Aeneas and Romulus. After the destruction of Alba, its civilization was transferred to Rome in order to justify the presence of “Alban” (Latin) traits in Roman culture, or better, of those traits which could be assigned to an ancient prehistory. The article also discusses some traces of Alban institutions in Rome, such as the Alban pontificate, the Alban Vestals, the cult of the Penates, etc.

Stefania Adiletta
Per una rilettura dei frammenti di Autoclide
pp. 91-108
Abstract: This article offers a general survey of the ancient literature Περὶ τῶν Ἀθήνησιν ἑταιρίδων, as well as some hypotheses on the identity of Gorgias of Athens (FGrHist 351), a writer cited by Athenaeus as author of a treatise Περὶ ἑταιρῶν.

Alessandro Campus
Code-switching nell’epigrafia punica
pp. 109-132
Abstract: This article examines Latin-Greek-Punic trilingual inscriptions, showing the differences in the three languages and linguistic interfe­rence between the various texts; it also shows the difficulty of the adaptation of Latin in North Africa, with the continued use of local languages following the Roman conquest.

Andrea Cucchiarelli
Archeologia epica della nave-città (in margine a Virgilio, Aen. 5, 119)
pp. 133-184
Abstract: This article argues that the phrase urbis opus that Virgil uses to describe the ship Chimaera in the ship race of Aeneid 5 draws upon a nexus of cultural and literary ideas connecting the ship to the city. By means of the ship race, especially by having things end badly for the Chimaera, Virgil expresses specific ideological themes fundamental to the Aeneid. The article also undertakes a systematic study of ships in the Aeneid, paying specific attention to Aeneas’ own ship (Aeneia puppis) in Book 10. The poem’s mythic Homeric context lends itself to being interpreted through the political and monumental context of Augustan Rome, especially through the propaganda that surrounded the battle of Actium, and also the “ship of Aeneas” that was later seen by Procopius in the Navalia.

Paolo Garofalo
Ex indulgentia dominorum. I Severi a Lanuvio (note a margine di CIL XIV 2101)
pp. 185-206
Abstract: Starting from an inscription found in 1862 by Wilhelm Henzen in the territory of ancient Lanuvium (a dedication to the emperors Septimius Severus and Caracalla by the Senatus Populusque Lanuvinus on occasion of the restoration of a public balneum), this article traces the relationships between the city of Lanuvium, the emperor Commodus (born at Lanuvium), and the Severan dynasty.

Maria Grazia Bonanno
L’Andromaca di Gaetano De Sanctis
pp. 207-215
Abstract: Originally delivered as a lecture, this article explores Gaetano De Sanctis’ novel Andromaca, discussing its relations both with the mythos as a traditional paradigm and the mythos as conceived and interpreted by an author or authors. If a myth, as Levi-Strauss surmised, is nothing other than the set of all variants that comprise it, we should include in the Andromache myth not only the Homeric and the Euripidean versions, but also De Sanctis’ interpretation.