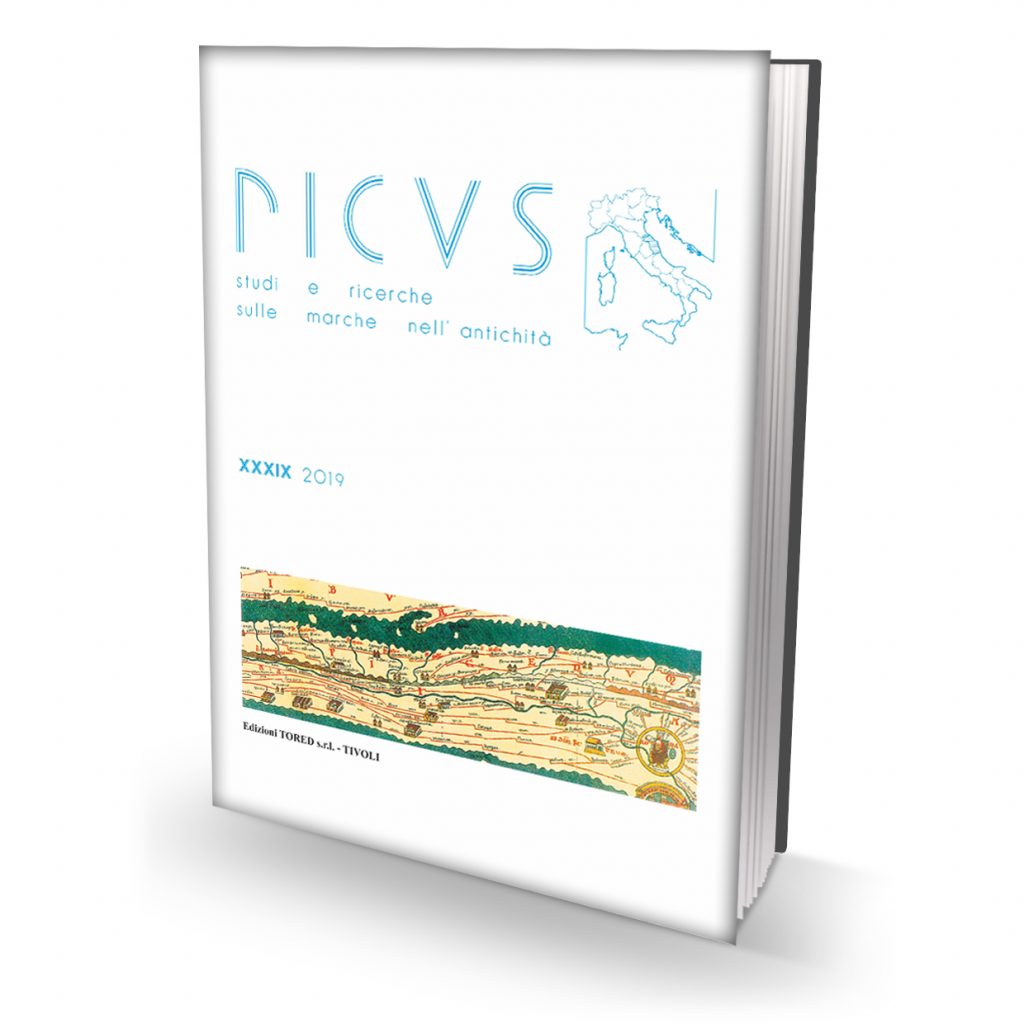 Y.A. Marano, La cristianizzazione delle città delle Marche in età tardoantica (IV-VI sec. d.C.), p. 51-114
Abstract: In comparison to other areas of northern and central Italy, the study of Christianization process in nowadays Marche, broadly corresponding to the territory of Augustan regio V – Picenum, suffers from the lack of a homiletic and epistolographic production that would allow to approach the spread of the new faith and the strengthening of the ecclesiastical institutions at a local level. Notwithstanding this, the integrated use of the totality of archaeological, epigraphic and written evidence (i.e. papal letters and conciliar lists) provides a coherent picture of the emergence of a Christian topography in the towns of Picenum within the period from roughly 300 to 600 AD. Marche, Late Antiquity, Christianization, early Christian topography, towns.

M.R. Ciuccarelli – M. Bilò, Archeologia preventiva ad Ancona, p. 141-166
Abstract: In the city of Ancona in the Marche region, a sector of a late Roman burial ground was discovered in piazza Cavour during preventive archaelogical research, near a large necropolis piazza on the hill sides of Cappuccini and Cardeto, occupying all the Pennocchiara’s moat. The burial ground comprised five tombs of “cappuccina” type and one into a wooden case. With the exception of tomb 5, cortaining a glass unguentarium, no funerary ser was found. On the basis of stratigraphic data and analysis of the few objects found, it is possible to say that the burial ground was in use between the imperial and the late Roman period. Ancona, Pennocchiara‘ moat, Roman burial ground.

S.M. Marengo, A proposito di un alfabetario, p. 179-187
Abstract: Re-exam of a Latin alphabet of the middle Republican age engraved after cooking on a Suasa bowl (Castelleone di Suasa – AN), in which the trident sign and letters E and F with two strokes appear. Alphabet, graffito, Suasa, writing.

V. Lani, L’anfiteatro di Fanum Fortunae, p. 189-204
Abstract: An archaeological excavation carried out between 1996 and 2000 has brought to light some structures relating to Fanum Fortunae Roman amphitheatre. The article traces the history of its discovery and traces diachronically the topographic development of this part of the city through the planimetric restitution of the building and the reading of the excavation data even after its abandonment. Fano, Roman urban planning, amphitheatre, archaeological excavation, opus vittatum.

L. Pedico, Centuriazione e sistemi alternativi di divisione territoriale: il caso di Attidium e Tuficum, p. 205-223
Abstract: In the Roman Age, the urban centres of attidium and Tuficum flourished in the territory between the modern Sassoferrato and Fabriano. The lack of information about dynamics of development makes any statement of detailed assumptions concerning the primal set-up and their land borders problematic. Important information are from Liber coloniarum, a precious source about the territorial set- up of the centres in the Roman Age. This information will be compared with historical sources, toponomastic and geomorphological data to recognize, verify and reconstruct the attidium and Tuficum centuriation. Centuriation, Liber Coloniarum, Attidium, Tuficum, the Marches.

G. Sinopoli, Domus romane di via Fanti ad Ancona: scavi e contesto urbanistico, p. 225-285
Abstract: The Roman complex found in Ancona between via Fanti and via Orsini is reconstructed here for the first time on the basis of the avaiable documents. It is possibile to offer a detailed description of the structures and of their phases of construction. Their chronology depends on the style of frescoes and pavements, waiting for future study of the objects collected during the archaeological excavations. The area was part of a lavish residential block, not far from the most important public spaces and with a view of the sea. Ancona, urban excavations, Roman houses, documentation, urban context.