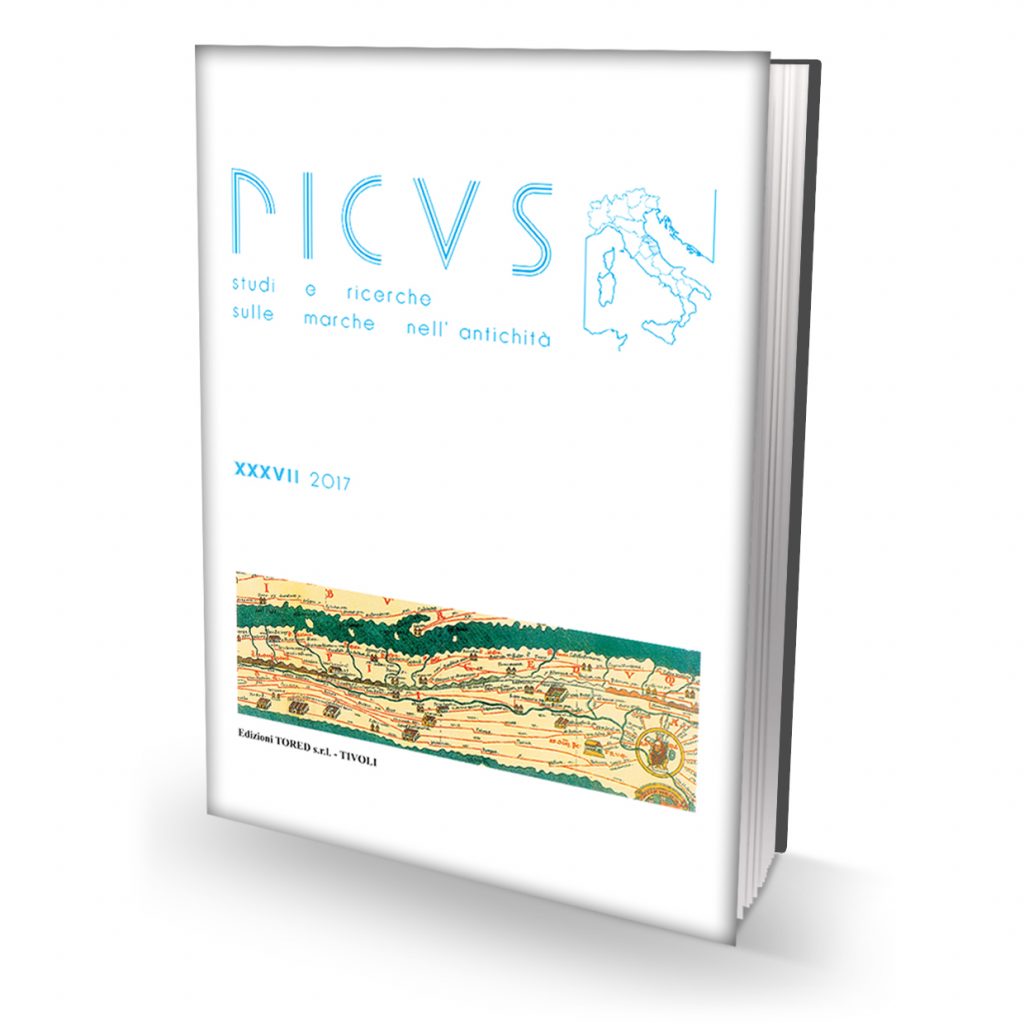 M. Mayer I Olivé, Observaciones sobre C.I.L. IX 5771 y el significado de PELLICI en su texto, p. 77-86
The object of this paper is to try to specify the value of pellici in the metric text of C.I.L. IX 5771. There are examined the possibilities of interpretation that could avoid approach of the term to the pejorative value of paelex. Epigraphy, Ricina, Roman History, Funerary Epigraphy, Carmina Latina Epigraphica.

G. Paci, I destinatari degli alimenta traianei, p. 87-97
In the documents illustrating the Trajan’s alimenta, the mention of Italy and the implementation of the program suggest that the recipients are the poor children of all citizens, without distinction of status or class. Trajan, alimenta, Beneficiaries of subsidies.

M. Bilò – M. Mariani, L’insediamento rurale di età romana nel territorio di Numana antica. Nuove acquisizioni dagli scavi in località Montefreddo – Sirolo (AN), p. 101-131
This article represents a preliminary synthesis of a bigger investigation that is still being carried out aiming to study the evolution of the agricultural landscape of the roman city of Numana. The aim is to catch the deep transformations of the territory in the roman era and in the transition to late antiquity and early middle age eras. The study requires a revision of the printed material; it draws information from archive data and also recent investigations on emergency archaeology interventions carried out in suburban contexts in the well known Montefreddo area – Sirolo An -. Numana, Montefreddo, Rustic Settlement, Centuriation.

S. Finocchi – F. Melia – S. Simonetti, Un sepolcreto piceno a Fontenoce di Recanati: notizie preliminari, p. 133-158
This article aims to present a basic summary of new archaeological findings in Fontenoce, in the area around Recanati. In the spring of 2016 preliminary digs conducted during the installation of a new roundabout brought to light numerous archaeological features. Among these, the elements attributable to the Picene era play an unequivocally important role. Archaeologists identified and stratigraphically analyzed a ring of funerary sites, built to protect an underground tomb. The discovery also suggests the presence, further confirmed by aerial photographs, of other archaeological features, which are comparable in size and can likewise be interpreted as funerary sites belonging to the same Picene community. The findings are indisputably valuable under multiple aspects: topographically, for the presence of a circular burial mound in an area where such phenomena of monumental commemoration had not previously been thought to exist; materially, for the types of personal effects buried along with the dead, which make the tomb closely reminiscent of those at Matelica, Pitino di San Severino, and Fabriano; and demographically, for its attribution to a community led by an aristocratic warrior class. Such elements open up important new horizons for our understanding of funerary practices in the Picene community at the end of the Orientalizing period and the beginning of the Archaic period. Picenum, Necropolis, Recanati, Funerary Kit, Orientalizing.

G. Gori, Il sepolcreto romano di Ponterotto (Fossombrone), p. 159-189
Of great interest was the recovery and study of Domenico Passionei’s epigraphic collection which the Cardinal’s nephew, Benedetto Passionei, set up around 1760 and which he kept in the family building at Fossombrone. The collection includes about 190 inscriptions, largely urban. Besides allowing us to examine all the new inscriptions from Forum Sempronii and the nearby territory, the PRIN project “Coloniae and Municipia of Roman Italy in the Digital Era”, provided the opportunity to recover the epigraphic material from Casa Passionei, which had been stored in one of the warehouses belonging to the Episcopal Seminary of Fossombrone. This allowed the recording of every inscription by means of modern methodologies (EDR) and the updating of both CIL and later publications, which assumed that the collection was lost. Collecting, Epigraphy, Eighteenth Century, Antiquities, Electronic Archive.

S. M. Marengo, I falsi epigrafici dell’Umbria adriatica (regio VI – C.I.L. XI) – Relazione preliminare, p. 191-219
The paper focuses the state of knowledge about the fake of the vi regio (Adriatic side) from the chapter of falsae et alienae curated by E. Bormann in C.I.L. XI . In the collections of Passionei Museums (Fossombrone) and Baviera (Senigallia) and in Lapidary Archaeological Museum of the Urbino Ducal Palace there are fakes and copies of which are given the list. Finally it is confirmed the urban origin of c.i.l. XI 728 *, 1, now in Fabriano. Fake, regio vi, Collections of Fossombrone, Senigallia, Urbino.

S. Menchelli – E. Iacopini, I territori di Firmum e Novana: analisi comparative sulle ricerche in corso, p. 221-243
We are presenting a concise comparative analysis of the results of the research which is being conducted by the University of Pisa in the valleys of the Tenna, Ete Vivo and Aso rivers, in the territories of Firmum and Novana, located in the present-day Comunanza. The data highlight the different ways in which the process of “Romanization” was carried out in these territories, and how the results of “Roman” interventions made with respect for, and the development of, local resources are still stratified in current landscapes. Picenian landscapes, Romanization, Firmum, Novana.